This document is the second rarities report of the Extremaduran Rarities Committee (CREX), created in 2016 and made up of seven members. A total of 83 records have been assessed, 94% of them from 2018 and the rest comprising older records dating back to 1993. 92% of the records received were accepted by the committee. The most notable records in this report are of White-tailed Eagle Haliaetus albicilla, Cory’s Shearwater Calonectris borealis and Trumpeter Finch Bucanetes githagineus, which represent the first records of each species in Extremadura. The first record of European Storm-petrel Hydrobates pelagicus to be assessed by the committee (and the second for Extremadura) is also included, as well as Brent Goose Branta bernicla (fifth for Extremadura), Lanner Falcon Falco biarmicus and Richard’s Pipit Anthus richardi (both seconds for Extremadura) and the second Tundra Bean Goose Anser serrirostris (third for Extremadura) after its separation from Taiga Bean Goose Anser fabalis and following on from previous records detailed in the last report. Other notable records are for White-headed Duck Oxyura leucocephala (fifth for Extremadura) and Red-throated Pipit Anthus cervinus (third for Extremadura) and new records of Sociable Lapwing Vanellus gregarius that appear to confirm its presence as a rare but regular winterer here. There were two new spring records of Wood Warbler Phylloscopus sibilatrix and a spate of Fieldfare Turdus pilaris records that continued the small influx of the species noted in autumn 2017.

This is the second rarities report compiled by the Extremaduran Rarities Committee (CREX). CREX, created at the start of 2016, is in charge of collecting, compiling and assessing records of wild bird species considered rare in Extremadura, while those considered national. 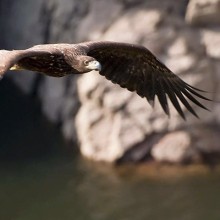 This website uses Cookies to improve your navigation and offer you a more personalised service. If you continue, we understand you accept their use. Learn more »
Accept